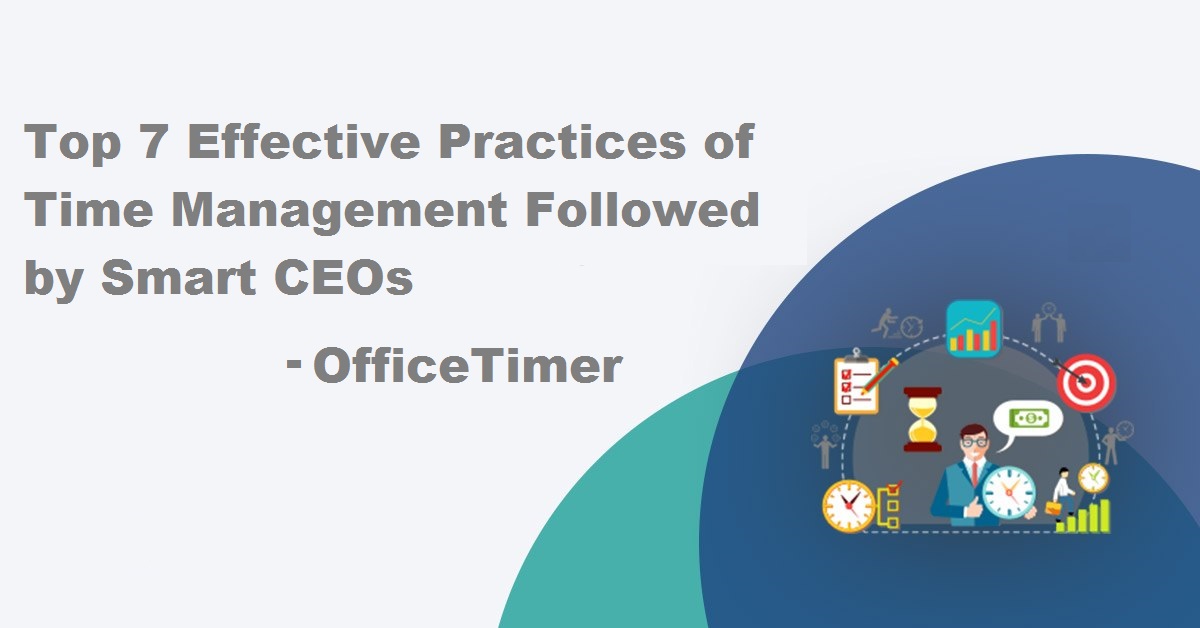 The word ‘CEO’ raises the bar- when it comes to giving a sense of direction and mission to all possible business operations running within an organization, irrespective of the business vertical to which it belongs. Therefore, those in this executive capacity prefer to leverage the power of technology and smart consultants to keep the business afloat in difficult times, manage to generate a decent ROI in an ever-changing market, have great networking with all possible stakeholders, and retain resourceful people in the organization. At times, even this support system doesn’t yield the much-anticipated results because of the mismanagement of one single resource. This resource is time. So, even if the executive leadership decides to invest in an upmarket and feature rich time tracking software, the woes don’t transform for good. Hence it is very important for the CEO to analyze and understand the nature of time management challenges both plaguing the employees in the
organization at large, and self off course!

Time Management Challenges Faced by the CEOs of the New Era

1. The need to touch base with multiple stakeholders both inside and outside the organization in a limited period of time- It goes without saying that CEO represents the mission and vision of the company that he or she leads and as a part of his or her responsibility, networking with stakeholders and communities both within the organization and outside holds a critical spot. Even though backed by a team, the CEO can’t really delegate everything. Multiple things big and small are exclusive to the role’s functional province.

2. The demand to have most of the meetings, interpersonal- According to one of the articles published in Harvard Business Review (August 2018 issue), the one on one meetings consumes roughly 61% of the CEO’s time. This is because interpersonal interactions offer a great opportunity to network and win the trust of critical people and create opportunities for furthering the business.

3. The constant demand to remain aware of the market- The role of the CEO is critical when it comes to exercising thought leadership within the organization from the top down to the new recruit. For this, an individual has to spend a considerable amount of time reading, attending discussion panels and networking with industry veterans. This role is extremely demanding when it calls for updated market information regarding technological innovations such as the newer time tracking software, ERP, HRM solutions on the block, and also the upcoming go-to-market strategies.

4. The demand for being active on thought leadership and networking platforms Visibility of an enterprise’s thought leadership on critical platforms such as Linked-In and Twitter is important beyond any measure. To remain active on social media, participate in CEO forum discussion panels, comment on relevant posts requires time and effort, and yes, a universe of study.

For the CEO, one who leads the executive team, it is very important to understand that where he or she involves himself or herself primarily signifies the priority. Therefore, here are some critical pointers that would help the modern day CEOs remain one step ahead in the management of time and prioritizing of business-critical chores.

1. Setting limits and making time for personal agendas- This might look a little offbeat when it comes to discussing the roles and challenges of a CEO. From a long drawn analysis conducted by industry veterans and top-notch consultants, it has evolved that setting certain limits at work and reserving a dedicated time for health and well being was super critical. CEOs must invest time in building up a regime for mental, physical and spiritual well being, for this would help him or she sustains and positively responds to the pressures of his or her role.

3. Avoiding extensive communications through email- E-mails are a necessary evil but it needs a check when it comes to usage. Too many conversations and communications over email eat up the valuable time and marginalize the need for having the meaningful face to face interactions with stakeholders. Instead, CEOs can adopt techniques such a video conferencing for replacing certain conversations over e-mails. Also, tools such as Boomerang and SaneBox helps in streamlining and prioritizing emails, so the new age CEOs can leverage all possible technologies that will help them remain on the top of their game.

4. Communicating the agenda clearly- There is no time to beat around the bush and waste time. It is important for the CEOs to explicitly communicate the business agenda, mission, and vision to the employees of the enterprise and stakeholders. This not only helps the leadership team get a clear direction but also helps the cross-functional teams align their tasks accordingly.

5. Applying the Pareto principle to the day to day tasks. According to this principle, one must dedicate 80% time to work that is super critical and calls for innovation and brainstorming. Remaining 20% of the times go out to those second in priority.

6. Restricting Meeting times- With so many meetings that are imperative to call off, it is important to set a time limit for each meeting in order to strictly stick to the time and the agenda.

7. Replace intensive reports with intuitive dashboards- It is super critical by all means to adopt technologies that minimize loss of time. Therefore, the heavy content intensive reports should be replaced with smart intuitive dashboards that clearly depict the historical data and has multiple filters to clearly depict the growth indicators and smart charts to show the KPI.

Best Practices to Implement Time Tracking Software in Your Organization